When telling our story there is always the dilemma of where to start, where to end, what to include. Recently when we were clearing out our library we rediscovered this book UNSUNG HEROES CAMBODIA - PEOPLE AND PLACES MAKING A DIFFERENCE written by Lee Anderson, Kerryan Griffin and Shawna Hartley published in 2013. The kids were so excited because on page 84 they found a story about us! After reading it again many years on, it dawned upon us that this story had summed us up better than we could ourselves. A lot has happened since it was written, most significantly is that all our children have been successfully reintegrated with their families and living in their community and our need for such large premises is no longer... but the Gecko essence is still there. It was an honour for our organisation to be considered for this book and to be along side so many wonderful people and places making a difference in Cambodia. Happy reading. 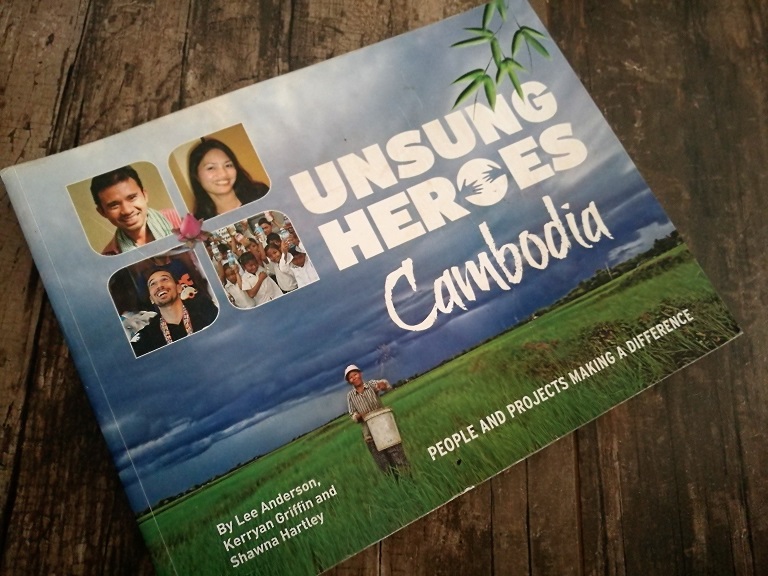 a tour through green gecko gates

As I approach the Green Gecko Project, the sign on the gate is the first indication of how seriously Green Gecko takes its child protection policy.

It is no surprise to learn that this was one of the first organisations in Cambodia to be certified as a 'Child Safe Organisation' by the international child protection organisation Child Wise. After I sign the visitors book and agree to the code of conduct, I am guided to a dedicated grass-roofed visitors hut.

The tidy complex of Khmer-style buildings, plus a large ball court, lunch huts and playgrounds funded by schools in Australia and Singapore, are certainly impressive. Also impressive is the Australian woman who bounds towards me with a huge welcoming smile. It is Tania Palmer, bright and bouncy and full of life.

As we talk and walk, a group of children are happily absorbed in an art class, creating artwork that is - like Tania - colourful and vibrant. We also visit the productive food garden.

"Now we are teaching the children how to grow rice and other vegetables" Tania said. "It not only gives them a skill, it helps to keep them grounded. We also have chickens and fish."

While Tania is telling me about the centre and how it came about she calls out cheerful greeting to the children as they come back from Khmer school. She reminds them about that they have to do next. Her energy and commitment is boundless; her pride and passion for the children is clear.

On a routine business flight in August 2004, Sydney-born Tania was idly flicking through the Virgin in-flight magazine when an article about a Cambodian orphanage in need caught her attention. It struck a chord so loud and immediate that Tania walked straight off the plane into a travel agency and booked a flight to visit the orphanage.

A month later in stifling tropical heat, Tania found herself surrounded by the begging hands and wide eyes of Siem Reap's countless street kids. Tania's eyes, arms and heart were wide open to the plight of these persistent children. She bought them hot meals, befriended them, learnt their names, melted when they smiled back, and so it became impossible to just walk away and forget them.

Tania did return to Australia, but only to pack up her home and reorganise her business so she could return to Siem Reap.

"I had no plan, no goal, no idea what the future would bring" she said Ã¢â¬Åbut the calling was so strong that it defied all reasonable logic. I had felt for years that professional success alone wasn't enough, and meeting then leaving these kids only confirmed it. I had become uncomfortable in my own skin and the privileged lifestyle I was living.'

In February 2005, Tania arrived back in Siem Reap and immersed herself in the world of the street children. Some were as young as 5 years old - carrying siblings even younger as they begged - vulnerable to abduction, abuse and disease. They would be on the streets until dawn, or rummaging through garbage to collect recyclables to earn a few cents.

She found the 5 year olds were often the main income earners for their impoverished families. Domestic violence, alcoholism and gambling were prevalent and more than 50% of parents had been maimed by landmines. The street children's situation presented challenges that were, in some ways, even more daunting than that of orphans because the needs of their parents had to be addressed as well.

Tania said she was overwhelmed by the children's resilience, and their innate determination to survive and just be kids - cheeky, fun-seeking, optimistic, wanting to trust in a harsh world of abject poverty where innocence is all but lost. They stole Tania's heart.

So did a local man named Rem Poum - gentle, quietly-spoken and compassionate. He soon became Tania's husband and the perfect other half to the Green Gecko Project.

Tania's dedication amazed Rem. He said "I decided I wanted to help the children too and then good luck came and we fell in love." Rem had intended to become a Buddhist monk!

They rented a building to provide a safe haven for the kids to play, wash, eat, learn and receive basic medical care.

Tania said "We named the centre Green Gecko - Green because, according to Asian symbolism, it represents family, harmony, health and peace and Gecko because, like street kids, geckos are numerous, scamper all around Cambodia announcing themselves with their loud warble, survive their early life without parental care, have nocturnal habits and strong instincts for survival".

Today, Green Gecko has new purpose built premises on more than an acre of land just 2 kms from town accessed by a bumpy red dirt road. It is surrounded by lime green rice fields and feels worlds away from the busy streets and tourist hub where the children used to live and beg just 7 years ago.

Life now for the 70 plus children under Green Gecko's care is infinitely brighter than it is for the many of their older siblings lost to prostitution and forced labour.

These children, now 100% off the streets, are safe and secure and enjoying a holistic approach to learning. They attend Khmer school, supplemented by English classes and Gecko activities. These include Me and My Planet general studies class, Khmer media, computers, English literacy and the ancient traditional Cambodian martial art of Bokator. The school has 'creative' Fridays and electives can be chosen from subjects like music, art, cooking and dance.

With support, a number of Green Gecko families have now started successful micro businesses in areas including motorbike repairs, fruit and chicken farming, security, pig farming, cooking and book selling. Many of the children's family members have been victims of violence, trauma and abuse themselves and have their own difficulties.

That makes it hard for them to maintain a positive attitude, but Tania said that supporting the families, not just the children, is the essential key to breaking the begging cycle for good.

"You can't help the kids without helping their families. It just doesn't work, well not in a sustainable way anyway."

In addition to the families, the Green Gecko outreach program works collaboratively with other local organisations to help the local community.

Tania explains on of the most important Gecko subjects the children study is Living Values, where they explore respect, communication and feelings with the family supporters. They learn how to protect themselves and how to keep themselves safe. Relationships and sex education also help them to make healthy and informed decisions as they step out into their adult lives.

As my visit draws to a close, Tania is anxious to get back to the kids but is happy to answer one final question: "What is your dream for these kids?"

She smiles as she answers "The same as any other mum - just times seventy."